Hawaii with a Toddler part 2


Lets move on to the next part of being on Honolulu!

We were in Honolulu for 2 days for the first part of our trip, but we got to do some neat things while we were there!

After breakfast Saturday morning, N, B, and I decided to head to Aloha Stadium for the big Flea Market/Swap Meet.  We didn't know what we were getting into, this thing was HUGE.  I learned later that day that when my Parents were stationed in Hawaii with the Air Force, she would take me and my sister to this SAME event.
Aloha Stadium Swap Meet
This swap meet had a little of everything in it.  We found Hawaiian Shirts for B and I, and a nice Hawaiian dress for N for our Luau in Maui later in the trip.  I don't have any great pictures of the swap meet itself, but I did note at one point that no matter where you were, this is a gorgeous place to be! 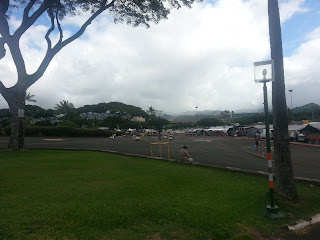 This is a great stop for souvenirs, t-shirts, jewelry, FOOD, any number of things.  And don't feel like you have to buy the first time you see something, prices vary a LOT!!

Time to interject the Becco!

We used a particular item quite a bit, and now is a great time to highlight it. 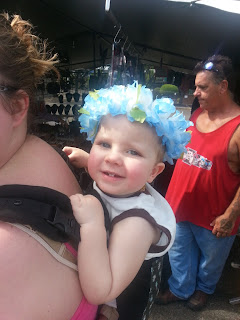 Here is a picture of little B hanging off N's back.  He is in a Becco Butterfly carrier, and we HIGHLY endorse this product.  Its a great carrier capable of both front and back carry (I won't go into why to baby wear or all that) but one of the greatest features is that you can "strap" them in to the carrier securely BEFORE you put it on.  It makes loading your precious bundle much easier.  Its VERY VERY comfortable to wear, and B LOVES it.  He can snuggle in, interact, see the world, and enjoys the closeness.!!  We highly recommend Baby Wearing on vacation!!

After the Swap Meet, we decided to find lunch.  Our original intention was to Try Helena's Hawaiian Food as mentioned in Man vs Food, but that didn't work out, so we went in search of some local food to try.  We ended up in a little strip mall near the KameHameha Highway called Jackie's Diner.  The food was fantastic!!   I had Lau Lau, Kuala Pig, some Poi, more... food was fantastic, and the Grilled Cheese was HIT with B.

I will note, we needed to accomplish a diaper change at this point, and Jackie's Diner did NOT have a changing table, and the bathrooms were not ok for changing a diaper.  We ended up doing it in the car after eating.  This was a common problem in the smaller places around the Islands.  In the hotels, or bigger restaurants, it wasn't an issue.  But be aware, small places may not present ideal diaper situations.  Our suggestion, bring a changing pad!

We then scooted back to the hotel to lay down and take a short nap.  That "Short Nap" ended up being the rest of the afternoon, waking up just in time for our evening plans.

Seafood Buffet at the JW Mariott in Ko Olina

A note, there WAS a shuttle going between the Mariott Beach Club and the JW, but due to our extended nap, we missed it.  No problem, thats what Valet is for!!
Anywho, we had dinner wit the rest of the family at the JW for their Seafood Buffet
Naupaka Saturday Seafood Buffet
This was an AMAZING buffet.  Fresh seafood, great local fresh fruit, and an open-air setting near a beautiful pool at the JW.  This is not a cheap meal, but I HIGHLY recommend it!

Yep, beer is going to get its own section here.  For those that know me, they will confirm that I am a BEER LOVER.  More so even than that, I'm a beer snob.  I LOVE good beer.  To be honest, I didn't count a trip to Hawaii as an opportunity to drink great beer, but I was wrong.  On Honolulu, I was introduced to Kona Brewing Company beer (though I can buy some of it locally now).  Their beers were consistently top notch, and Fire Rock Ale has quickly become the Pale Ale of choice in our house!
I'll touch on this again in Maui, with a different brewery! 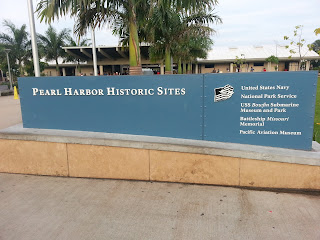 So, Sunday morning, we had plans to meet up with some other family members and tour Pearl Harbor.  This is a place worth doing your research on... ESPECIALLY with a Toddler.
We purchased tickets ahead of time, specifically, the "Passport to Pearl Harbor".  This gives you access to the Arizona, the Bowfin, the Missouri, and the Pacific Aviation Museum.  You schedule your ferry ride to the Arizona Memorial at the time you buy the tickets.  We included the audio tour, which made a huge difference.
The place to get these tickets ahead of time is:
Passport to Pearl Harbor Tickets

There are two important things to note about this place, especially with a Toddler:

And yes, I did say Diaper bags.  Now, there is an interesting workaround that we discovered.  You can not bring a bag in, however, if you go to the gift shop RIGHT inside the gate, you can buy a little canvas pearl harbor bag for about $2.50 that you CAN carry around.
Our ferry tickets were for 9am, so we met up with the rest of the group in time to start our tour.  The entire Arizona Memorial tour starts with a brief talk by a Park Ranger, and then a short film giving even more detail to the event and what surrounded it.  B wasn't to interested in the movie, but I found it fascinating.  After the movie, you board a ferry boat for a trip over to the Memorial itself.  The boat ride is short, but offers amazing views of the Memorial and the Missouri

A Good thing to point out here is that Photography is fine during the boat trip, but they do ask you NOT to take any photos once they stop the boat, until you are inside the Memorial.  Your welcome to take photos when exiting, but not when entering.
I won't spend too much time talking about being on the Memorial other than to say that it is a powerful place.  Its an experience I think everyone should have.  I have lots of pictures, so I'll try to do a "Best of" Picture post at a later date
After the Arizona, the rest of our family went to see the Missouri, but it was getting close to lunch time, so we decided that B wasn't going to make it for a 2-3 hour stint there, so we parted ways.  We did go tour the USS Bowfin, which is a former US Navy Submarine.
NOTE: Under 4 not allowed on this tour
Since B couldn't go, we took turns.  I ran our camera out of power taking pictures.  This was an AMAZING up-close look at a submarine and the life of those on board... WAY NEAT, and included in your Passport ticket.  After I switched with N and she walked the ship, B and I hate a hot dog and ran around.  The rest of the park grounds contain all kinds of neat displays like old torpedos (including a japaneese "Kamakazi" torpedo), a com station with working periscope, and this AWESOME gun pod: 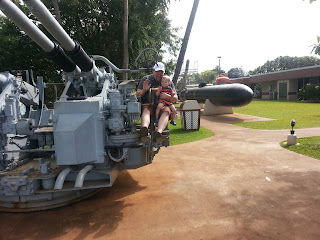 B and I giggled and laughed on this thing.  There's even a video, I'll try to remember to post it on Youtube.
After Pearl Harbor, we grabbed lunch at a thai place and settled down for nap

Sunday Evening and the Mall

After our afternoon nap, and some play time in the pools and beach, we decided to head back to town and check out the Ala Moana Shopping Center (read, big mall).  Specifically, I was after some japaneese shaving supplies, and there is a japaneese supermarket in the mall.
Shirokiya
Being the typical American, this place was different than what we see in the midwest.  It was a neat experiance!  Ala Moana mall was overall a very interesting place that I would love to spend more time in.  That evening we had Pizza at a California Pizza Kitchen in the mall.  B LOVES Pizza, and this was no exception.  He even got fawned over by multiple grandma-type ladies, and he soaks that stuff up!!

The next morning, the entire family piled into our cars (after breakfast at Longboards again, YUM) and headed to the Dole Pineapple plantation.  As I mentioned in the picture of the beach from the first post, it was overcast at breakfast.... well, by the time we made it to the Plantation, overcast had turned into a TORRENTIAL DOWNPOUR.  Fortunately, on the drive over there, B fell asleep.  So, we waited in the car's for a short time, and when it didn't stop, I stayed with B and everyone went into the visitors center to see if there was anything to do.  They reported that it was packed, they did a little shopping, and returned to the cars.  N brought us a big bowl of pineapple icecream with fresh chunks of pineapple on top... WOWIE WOW WOW.  I think this began B's obsession with pineapple for the rest of the trip, heck he's still obsessed with it!
Since this didn't work out well, or intention was to head to the International Market in Waikiki until our flights that afternoon.  With the weather not wanting to let up, everyone but us decided to just head to the airport and see if they couldn't hop an earlier flight to Maui.  N, B, and I went in search of lunch, and found a little 60s diner called the Rock Island Cafe in Waikiki and ate.  It was a very interesting little part of town.  Called the "Kings Village" it was throwback to OLD hawaii in the middle of modern Wakiki.  Neat little place. 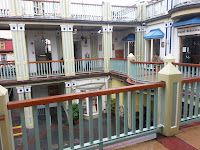 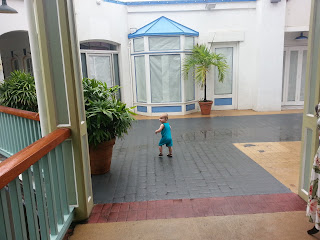 The rain did finally let up a bit, and as you can see above, little B got the opportunity to run free.  This was a great space for this, as he could run around the upper area in a circle with no worries about getting in the way.  He had a BLAST!

From that point, we took off to the airport, and that was the end of our journey in Honolulu for now.