Hawaii with a Toddler Part 4

So, this part of my review gets down to the purpose of the visit to Hawaii.  Without going into too much detail....  N's Dad passed away on fathers day 2012.  One of his wishes was to have his ashes spread at the top of Mt Haleakala.  N says it was a place that he loved after a visit with a family when N and her sister were young.  Needless to say, it was an emotional experience, but one that I am glad I got to be a part of.
N's dad was a great man, and I'm glad to have called him a friend.  He was a great Dad, an AMAZING Grandfather to B, and a very very generous man.  He provided for his family to make this trip, and it was an amazing legacy for him to leave.

Anyway, down to the specifics of traveling to this place.  The "typical" time to visit Haleakala is at sunrise.  This does, however, present some challenges.  We were staying on the other side of the island, so we were looking at a 3 hour drive to get there (I think it ended up being a shorter trip, but still, a long one).  The other HUGE challenge is clothing.  The morning we were at the top of Haleakala, it was 30 degrees..... yes I said 30 degrees.   Who packs for FREEZING weather in Hawaii?  Well, if you want to do this (and I recommend it), PLEASE DO!  We brought clothes for this, and also were given blankets by a very kind Concierge and we were still COLD COLD COLD!

Our adventure began at 3am.  We all got out of bed and headed down to valet.  They were nice enough to have scheduled the night before to have our cars waiting for us.  We piled in and started the drive.  Luckily, B just went back to sleep for this drive.
As you get closer to the road up the mountain, you start to realize that the only people on the road, are going the same place as you are!  Its also a good idea to note that the last chunk of this drive is NOT easy.  The road curves and turns back on itself OVER AND OVER AND OVER, and does so in the DARK.  It was a bit of a harrowing drive, so make sure your awake.

About half way (ish) up the mountain we were all feeling hungry, and sleepy and needed a pit stop.  We discovered an enterprising young man sets up a coffee truck along the side of the road.  A quick stop afforded us a bathroom, a cop of good coffee, and a muffin or doughnut.  This man was also HILARIOUS.  He indicated that we were closer than we thought, that we had plenty of time, and that there had been people for at least an hour before us RUSHING, afraid they were going to miss sunrise.

On Top of Old Smokey (it is a volcano you know)

Once you pass into the state park, its good to note that there is a fee to get in.  Our lead driver payed for us all, but I believe it was $5 for a car, and that was good for 2 days.  After that, its only a 10 minute or so drive to the top of the mountain.  There are actually 2 spots at the top.  One is the first parking lot, and is where we ended up, but there is a viewing station a few hundred feet higher and a short drive away.  It does have a covered viewing area, and its even windier up there.  It was deemed to be full and the road closed by the time we got there.

At this point we all hit the bathroom again, and waited in the heat of our vehicles for about 20 minutes or so.  It was COLD COLD COLD outside.  As we approached sunrise, we headed to the edge of the crater with our blankets and cameras. 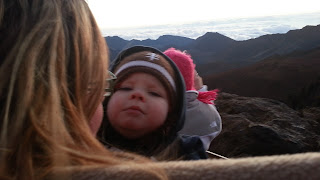 I have to apologize a bit here, the only pictures I got were from my cameraphone.... our good DSLR was 3 hours away in our hotel room... DOH! 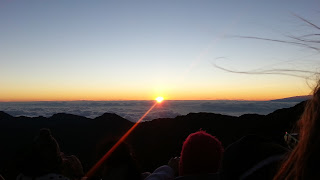 The sunrise was BREATHTAKING, and really was an experience I will never forget.  There is a Hawaiian legend associated with it, but I will not go into that.... other than to say as part of the legend, a chant is performed at sunrise, and a native park ranger performed this... it was amazing and quite reverent as the crowd was quiet and just took in the amazement before us. 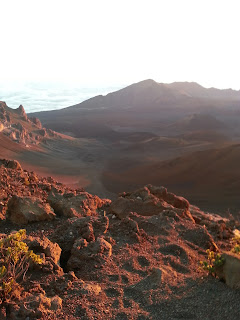 Once the sun had risen, the ranger also pointed out something pretty amazing... This was one of the only places on the earth where you could see the shadow of the mountain you were on clearly behind you, NEAT! 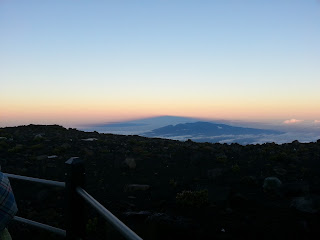 And then it was time

We waited for the crowd to clear out and warmed up in the car, and then headed the final few hundred feet up to the top viewing station.  At this point the family said goodbye to N's Dad.  This was extremely emotional, and a very profound experience.  He picked an amazing place to rest for eternity!
B and I hung back at one point to give N, her sister, and her Uncle some private time. 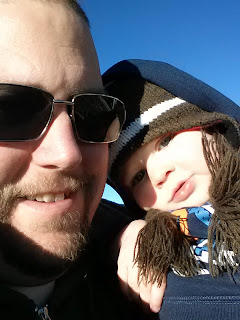 After paying our respects and grieving, we headed back down the mountain.

Restaurant on the way down

The trip down the mountain revealed much of what the dark concealed on the drive up... sheer drop-offs, and a WINDING road, but it was beautiful!  AT the same place where the Coffee Cart was earlier, we stopped and met the rest of the family for breakfast.  There is an amazing restaurant here. The Kula Lodge this place had good food, and again, I had LOCO MOCO!! 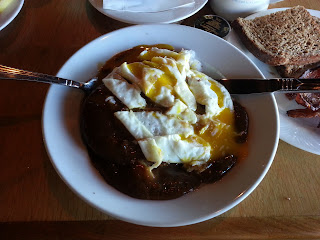 The view from the restaurant was stunning.  It looked over the side of the mountain down onto the valley and the rest of the Island of Maui.. AMAZING place. 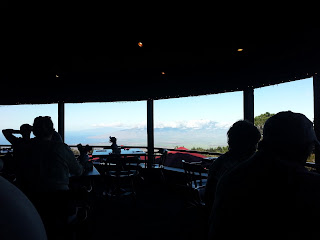 We made our way back to the hotel, and were exhausted.  It was getting close to lunch time, so we got into our swimwear and headed down to the pool to play a bit and cool off (its warm at sea level) before we ate.  B wasn't to keen on the pool, but he did splash in the kiddy splash pool a bit.  We then ate at the pool.  I had some AMAZING fish tacos.
After this, the rest of the family headed of for a submarine tour, but since B was too young, we opted for a nap, and THAT was a good idea! 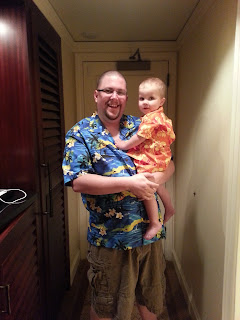 We woke up from our nap in time to head to our Luau.  This was a package deal along with the submarine tour, and that worked out in our favor.  The luau we chose was the Royal Lahaina Luau and it did not disappoint.  The fact that it was a package worked out for us in a neat way.  The rest of the family were taken from the sub, to the hotel where the Luau was, but got there quite early.  They were greeted at the gate with an offer to upgrade to "VIP" tickets for just a few dollars.  They did so, and scored us FRONT ROW seating for the show, as well as they got an extra hour or so of open bar fruity drinks.  They were quite entertaining when we got there!
B enjoyed the fruit drinks (with no alcohol of course) and we all enjoyed our meal.  The had quite the selection of food for the kids, and even the Adults liked the Mac and Cheese and Chicken Nuggets!  And, I Was the only one willing to try the Poi! 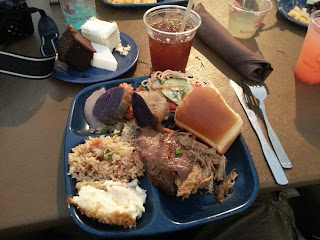 The show itself was the highlight of the evening.  B was ENTHRALLED by the colors, music, and dancing. 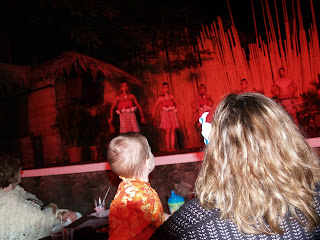 Before the actual show started, he and N even got to go learn to do the Hula, though he was less than cooperative. 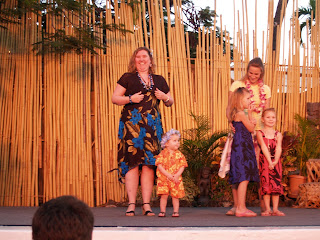 We ended the evening with a photo of our little family, and the day that started out so emotional and sad, ended up very fulfulling and full of family spending time together.  N's Dad had to have been pleased!

The next morning, we met up with the family at the Honoloa store again for breakfast.  We didn't have group plans until the afternoon, so we all went our separate ways.  N, B, and I went in search of coffee... GOOD coffee.  A little internet research pointed us to the Maui Grown Coffee Store.  They had some amazing coffee, and we sampled quite a bit.  This place is easy to find, as its near the smoke stack in Lahaina.  We headed back to the hotel but took the "scenic" route, ending up by Lahaina High School, which has an amazing view of the town and the harbour. 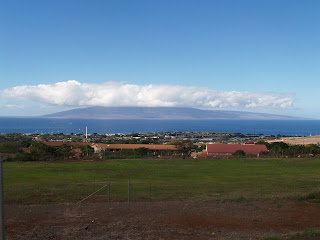 Relaxing at the hotel

We had a little time to kill, so we relaxed at the hotel at this point.  They have a golf cart that runs as a shuttle from the pool down to the beach (its a bit of a hike) so we wandered down there.  B was not having water this day, so he and N went up to the pool to hang out, and I played in the water for a bit.  This is an AMAZING beach, and like all other beaches on Maui, its public accessible.  Soon it was time for a quick bite to eat, and then off to our next adventure!

We happened to be in Hawaii smack in the middle of prime Whale watching season.  I have to be honest here and say that I was very.... uninspired by the idea of whale watching.  I figured it would be boring and only slightly interesting. MAN WAS I WRONG! 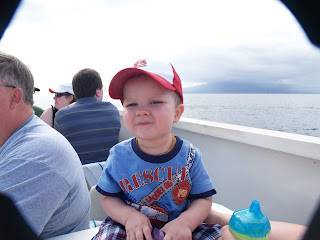 We ended up going on a tour with the Hawaii Ocean Project and had an AMAZING time.  There were whales constantly almost the entire time.  I took HUNDREDS of pictures. 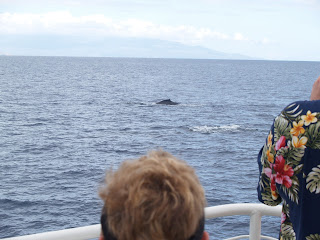 We even got to watch a prolonged exchange between 2 males and a female with her little baby.  It was FASCINATING.  I will note, B didn't really care for any of this.  He was uninterested in the whales, and spent most of the trip sitting and playing with Aunt B at a table.  I wouldn't call this a Toddler "unfriendly" tour, but not an exciting activity for a not quite 2 year old. 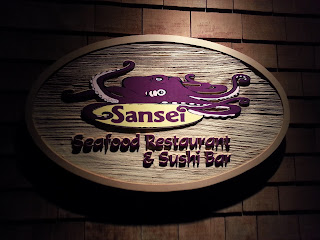 After our whale watching, we headed back to the hotel, and a few of us decided to go to a highly recommended Sushi place just up from the hotel called Sansei,  I would highly recommend this place.  It wasn't badly priced for GOOD sushi, and the non-sushi offerings of local fresh fish, steaks, and more were delicious as well.  We REALLY enjoyed our food, our sake, and our company!
One of my favorite pictures from the trip was from this place... even though its blurry and dark, and not a "good" photo.. I LOVE IT! 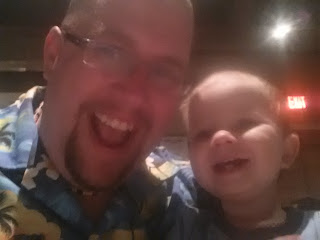