Hawaii with a Toddler Part 5

Unfortunately, our time at the Ritz Carlton had come to an end.  There was a writers conference of some kind starting, and we were not able to keep our room any longer.  This was also the time when the family was going to split up for its own adventures.  So, B, N, and I packed up, chatted with the Valet's one more time, and drove away, but more detail on that later, first, we have to eat!


Breakfast at the Honoloa Store

As had become a good tradition, breakfast was the Honoloa store again.  I deviated from Loco Moco to try another locally popular item... SPAM.  I remember now why I haven't eaten it in years...

As I described above, we now had to checkout of the Ritz Carlton.  I fully intend to go back someday!  But, we had a completely different adventure ahead.  Knowing that we needed another place to stay, and wanting to see / experience a different part of the island, we booked a Condo in Kehi.  So, we drove down tword Kehi and gathered our keys, lock box code, and such for the Condo.  Kehi is a much different place than Lahaina or Kapalua or Kaanapalli where we had been.  Much more local, much less touristy, and much less fancy!  It is, however, FILLED with condos to rent. 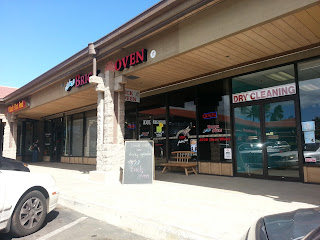 Once we secured all our stuff and details for the condo, we headed to find lunch.  We asked B what he wanted, and his normal answer appeared... "PIZZA!" So off to yelp to find pizza.  N located an itallian restraunt that got good reviews, so we drove there, only to find out they were CLOSED for lunch.  But not to be outdone, behind us, in the same shopping center was Maui Brick Oven!  WE FOUND PIZZA!  Now, I will say we were a little skeptical at first because plastered on the door was "100% Gluten Free".  But, yelp said to give it a go, and the smells were good, and B was HUNGRY (so was I), so in we went.
We were welcomed by the owner and his wife, some of the most FRIENDLY people we met on the island.  We were seated just across from where the ower was making the pizzas fresh.  He chatted with us while we waited for our pizza.  The crust was made from a very loose dough with no wheat flour in it.  We ordered a "Polynesian Passion" pizza and a small pineapple pizza for B.  THIS PIZZA WAS DELICIOUS!!! WOW WOW WOW.  What an amazing product they are putting out!  This was also a regularly priced place, not the high priced stuff you hear about being normal in Hawaii!  If your ever in Kehi, stop by! 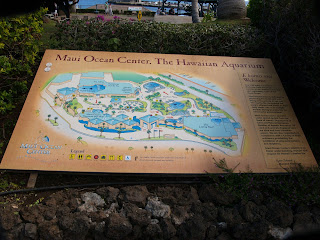 After eating, it was time to head to the Maui Ocean Center.  This is a large aquarium right off the ocean just outside of Kehi.  The owers of Maui Brick Oven confirmed our suspicion that it was a neat place.  B is obsessed with "Fishies" and LOVED running between tanks and looking at the fish, turtles, sharks, and all that they had to do.  We toured the whole place, including a plexiglass tunnel under the huge shark tank. 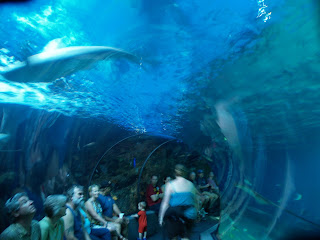 It was awesome to be surrounded by these amazing fish.  They even send divers in to do a "show" for the kids.  Though, B was getting tired and was uninterested.

Check in at Condo 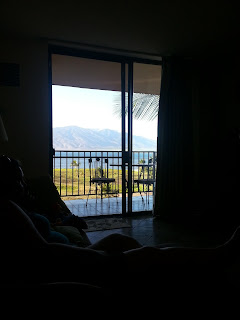 A short drive from the Aquarium, we finally headed to our Condo.  We used Vacation Rentals By Owner to find our Condo, and it was a great service.  Condo's are an attractive option for a number of reasons.  They offer kitchens, and seperate bedrooms (or even multiple bedrooms) and are often MUCH cheaper than a hotel.  Many have great amenities such as pools or fitness centers.  Our condo was at the Kauhale Makai complex.  We had assigned parking and the process to get checked in was quick and simple.
Our Condo had 1 bedroom, a full kitchen and a living room/dining room.  It also had a balcony that looked out over the beach and ocean.  It was a quaint little place, clean and well appointed.  I will say that it was not the most comfortable of beds, and the complex is a little dated, but again, it was clean, and it was a nice place to stay!

The condo had some basic beach toys, and B wanted to play, so we headed down to the beach.  I will say that the beach in this part of Kehi was less than desirable.  It was rocky, the bottom under the water was actually muddy, and it was generally not a nice place to spend the day beaching.  But we did play for a little while and then walked back to our room to change for dinner.  I've heard there are better beaches in Kehi, but be aware, not all beach front in Hawaii is good.

Anyone who knows me well, knows I LOVE indian food, and so does N.  In planning our trip, we decied we couldn't pass up Monsoon India in Kehi.  This indian restraunt sits right on the ocean, and they open up the huge doors to let the cool breeze in.  They had a buffet the evening we went, and we really enjoyed ourselfs.  They also did not charge for little B, and he enjoyed himself.
The only negative about this place (and it wasn't OUR problem) was another couple that was seated just before us... we sat down with our toddler, and they were AGHAST that they would have to sit near a child.  They actually demanded to be moved so they could enjoy their meal.  Little did they know that B is a polite, mostly quiet, and very well behaved child.. MOST OF the time.  We rarely run across people like this, but it always strikes me as odd that people would be supprised or upset that someone would DARE bring their child to a restraunt.. haha


In search of Coffee and stuff

On our way back, we hit a local supermarket in search of a few things.  Specifically we were looking for Kona coffee, macadamia nuts, and other things to send back home.  We found coffee on sale, and a great price for the nuts.  We also secured some bananas and breakfasty foods for B for the morning.  Again, all cheaply.. you really can eat for a reasonable cost in Hawaii!
This is probably the right time to point out our mistake.  On the same shelf as the Kona coffe, and also on sale was a Maui blend coffee.... both made by the Maui Coffee Company.  One is 100% Kona beans, one is 100% Maui grown beans.... we intended to buy the Kona, we made it home with 4 bags of the Maui...... OOPS!!!  Another excuse to go back?  And note, the Maui blend is DELICIOUS!

This was our last Day in Maui, and it was totally our to do what we wanted with.  We headed to the post office to mail back the coffee and other stuff so we didn't have to pack it.  We noticed there was a Craft Fair/Swap Meet right there in Kehi.  We stoped in there to see what was avaliable.  Lots of local crafts, jewlery, touristy stuff, and clothes.  As well as fresh local fruits of all kinds.  And free to get in!

We then headed across the island back to Kahalui to find the Maui Swap Meet... an little bigger event than what we just left.  This place was quite large, and in a beautiful location! 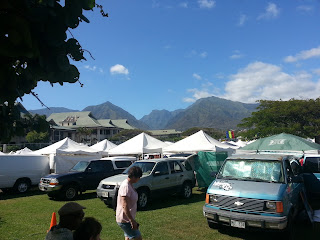 We were in search of a pendant for N, a snack, and whatever else caught our eye.  There was clothing, collectables, jewlery, food, almost anything you could think of there to buy or shop for.  We found a booth selling locally made breads and deserts and had some amazing fudge and pineapple bread.  N found the pendant she wanted, but by the time we looked at the rest of the event for a better price, the booth had shut down and gone home :(.  I did spot a Korean Taco Truck at one point and hurried over to get a snack.. but they were out of ALL Their taco meats.  The guy did recomend the Kimshee Frys, and I was not dissapointed... YUMMY!

Our eventual goal was to head to the beach, but it was lunch time, and we were hungry... so we headed to Paia to see what we could find.  We ended up at Johnny B's 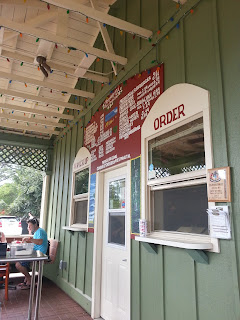 I had fish tacos that were yummy, B got a grilled cheese (one of his favs) and N enjoyed her lunch as well.  Its a small place with all open outside seating... but it is quite near...... 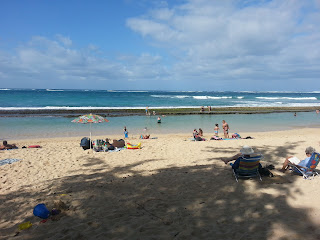 This was our other real goal for the day... Baby Beach!  This is not really listed on any maps, but we had heard about it when researching the islands.  This is an ideal place for kids... there is a LONG rock barrier between the sea and the beach giving a very protected bit of water about 20-30 ft wide.  All the surf is cut down by the barrier and the water is calm... though it does move a little.  B loved it and we played around for a while.  I eventually wound my way further up the beach to the unprotected portion and played in the surf.  We even had a fun time playing in the sand and building sand mounds just to knock them over!

It was starting to get late, and the sun was going down by the time we left the beach, so we needed to find dinner.  Having a full kitchen at the Condo, we decided to visit Pukilani Suparette to do some shopping.  You will hear adds for "Your easy does it place" on the radio, and its for this place. Its a small supermarket, but they have LOADS of prepared foods and deals.  We ended up with some local butternut squash ravioli, some pre-marinated terryaki beef and assorted vegetables.  We took this back to the condo and cooked dinner. 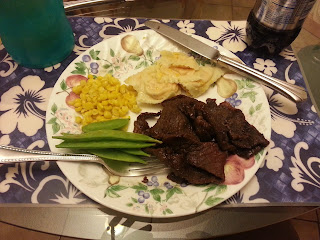 We ended our day on the couch relaxing watching a little TV, and letting B catch up on the Sesame Street world as we relaxed.  Then off to bed for our last night in Maui